Theory of liberty ‘On Liberty’

Mill’s On Liberty addresses the nature and limits of the power that can be legitimately exercised by society over the individual. One argument that Mill develops further than any previous philosopher is the harm principle. The harm principle holds that each individual has the right to act as he wants, so long as these actions do not harm others. If the action is self-regarding, that is, if it only directly affects the person undertaking the action, then society has no right to intervene, even if it feels the actor is harming himself. He does argue, however, that individuals are prevented from doing lasting, serious harm to themselves or their property by the harm principle. Because no-one exists in isolation, harm done to oneself also harms others, and destroying property deprives the community as well as oneself. Mill excuses those who are “incapable of self-government” from this principle, such as young children or those living in “backward states of society”.

Mill argues that despotism is an acceptable form of government for those societies that are “backward”, as long as the despot has the best interests of the people at heart, because of the barriers to spontaneous progress. Though this principle seems clear, there are a number of complications. For example, Mill explicitly states that “harms” may include acts of omission as well as acts of commission. Thus, failing to rescue a drowning child counts as a harmful act, as does failing to pay taxes, or failing to appear as a witness in court. All such harmful omissions may be regulated, according to Mill. By contrast, it does not count as harming someone if — without force or fraud — the affected individual consents to assume the risk: thus one may permissibly offer unsafe employment to others, provided there is no deception involved. (Mill does, however, recognize one limit to consent: society should not permit people to sell themselves into slavery). In these and other cases, it is important to keep in mind that the arguments in On Liberty are grounded on the principle of Utility, and not on appeals to natural rights.

The question of what counts as a self-regarding action and what actions, whether of omission or commission, constitute harmful actions subject to regulation, continues to exercise interpreters of Mill. It is important to emphasize that Mill did not consider giving offense to constitute “harm”; an action could not be restricted because it violated the conventions or morals of a given society.

On Liberty involves an impassioned defense of free speech. Mill argues that free discourse is a necessary condition for intellectual and social progress. We can never be sure, he contends, that a silenced opinion does not contain some element of the truth. He also argues that allowing people to air false opinions is productive for two reasons. First, individuals are more likely to abandon erroneous beliefs if they are engaged in an open exchange of ideas. Second, by forcing other individuals to re-examine and re-affirm their beliefs in the process of debate, these beliefs are kept from declining into mere dogma. It is not enough for Mill that one simply has an unexamined belief that happens to be true; one must understand why the belief in question is the true one.

‘On Liberty’ social liberty and tyranny of majority

Mill believed that “the struggle between Liberty and Authority is the most conspicuous feature in the portions of history.” For him, liberty in antiquity was a “contest… between subjects, or some classes of subjects, and the government.” Mill defined “social liberty” as protection from “the tyranny of political rulers.” He introduces a number of different tyrannies, including social tyranny, and also the tyranny of the majority.

Social liberty for Mill was to put limits on the ruler’s power so that he would not be able to use his power on his own wishes and make every kind of decision which could harm society; in other words, people should have the right to have a say in the government’s decisions. He said that social liberty was “the nature and limits of the power which can be legitimately exercised by society over the individual”. It was attempted in two ways: first, by obtaining recognition of certain immunities, called political liberties or rights; second, by establishment of a system of “constitutional checks”.

However, limiting the power of government is not enough. “Society can and does execute its own mandates: and if it issues wrong mandates instead of right, or any mandates at all in things with which it ought not to meddle, it practices a social tyranny more formidable than many kinds of political oppression, since, though not usually upheld by such extreme penalties, it leaves fewer means of escape, penetrating much more deeply into the details of life, and enslaving the soul itself.”

‘On Liberty’ View on liberty

John Stuart Mill’s view on liberty, which was influenced by Joseph Priestley and Josiah Warren, is that the individual ought to be free to do as he wishes unless he harms others. Individuals are rational enough to make decisions about their good being and choose any religion they want to. Government should interfere when it is for the protection of society. Mill explains,

“The sole end for which mankind are warranted, individually or collectively, in interfering with the liberty of action of any of their number, is self-protection. That the only purpose for which power can be rightfully exercised over any member of a civilized community, against his will, is to prevent harm to others. His own good, either physical or moral, is not sufficient warrant. He cannot rightfully be compelled to do or forbear because it will be better for him to do so, because it will make him happier, because, in the opinion of others, to do so would be wise, or even right…The only part of the conduct of anyone, for which he is amenable to society, is that which concerns others. In the part which merely concerns him, his independence is, of right, absolute. Over himself, over his own body and mind, the individual is sovereign.”

‘On Liberty’  freedom of speech
An influential advocate of freedom of speech, Mill objected to censorship. He says: “I choose, by preference the cases which are least favorable to me – In which the argument against freedom of opinion, both on truth and that of utility, is considered the strongest. Let the opinions impugned be the belief of God and in a future state, or any of the commonly received doctrines of morality… But I must be permitted to observe that it is not the feeling sure of a doctrine (be it what it may) which I call an assumption of infallibility. It is the undertaking to decide that question for others, without allowing them to hear what can be said on the contrary side. And I denounce and reprobate this pretension not the less if it is put forth on the side of my most solemn convictions. However positive anyone’s persuasion may be, not only of the faculty but of the pernicious consequences, but (to adopt expressions which I altogether condemn) the immorality and impiety of opinion. – yet if, in pursuance of that private judgement, though backed by the public judgement of his country or contemporaries, he prevents the opinion from being heard in its defence, he assumes infallibility. And so far from the assumption being less objectionable or less dangerous because the opinion is called immoral or impious, this is the case of all others in which it is most fatal.”
Human rights and slavery

In 1850, Mill sent an anonymous letter (which came to be known under the title “The Negro Question”), in rebuttal to Thomas Carlyle’s anonymous letter to Fraser’s Magazine for Town and Country. Carlyle had defended slavery on grounds of genetic inferiority and claimed that the West Indies development was due to British ingenuity alone and dismissed any notion that there was a debtedness to imported slaves for building the economy there. Mill’s rebuttal and references to the ongoing debate in the U.S. at the time regarding slavery were emphatic and eloquent. The full text, as well as a link to the Carlyle letter which prompted it, is available online.

“A Feminine Philosopher”. Caricature by Spy published in Vanity Fair in 1873.

Mill saw women’s issues as important and began to write in favor of greater rights for women. With this, Mill can be considered one of the earliest feminists. In his article, “The Subjection of Women” (1861, published 1869), he talks about the role of women in marriage and how he felt it needed to be changed. There, Mill comments on three major facets of women’s lives that he felt are hindering them: society and gender construction, education, and marriage. Mill is also famous for being one of the earliest and strongest supporters of ever greater rights for women. His book The Subjection of Women is one of the earliest written on this subject by a male author. He felt that the ‘oppression’ of women was one of the few remaining relics from ancient times, a set of prejudices that severely impeded the progress of humanity.

Mill’s ideas were opposed by Ernest Belfort Bax in his treatise, ‘The Legal Subjugation of Men’. 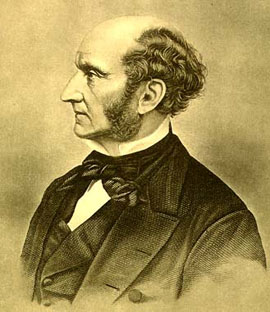 The Remarkable Rocket By Oscar Wilde

The Devoted Friend By Oscar Wilde